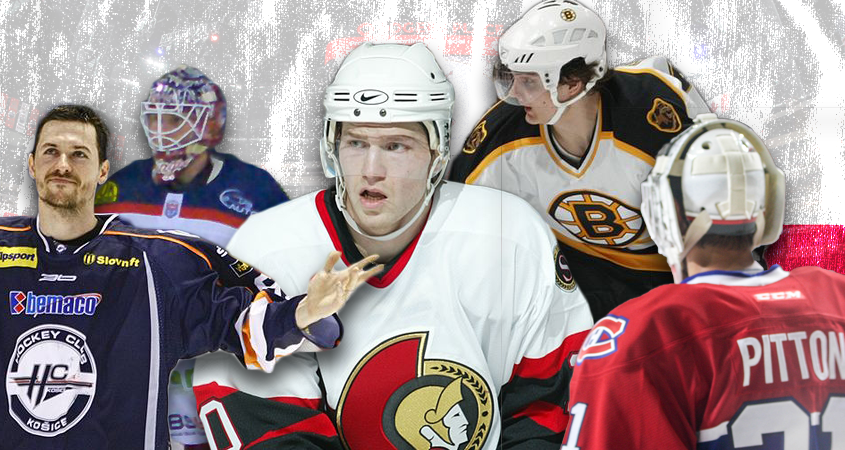 We are now coming into the most recent seasons of Polska Hokej Liga action. Many players who were part of those late 90s or early 2000s draft classes were in their final years playing in smaller leagues. Poland saw a substantial influx of those players, who became valuable veterans for their squads. These players helped the growth that Polish hockey has seen in recent years. The import rule was abolished during this time, which also really helped the development of Polish hockey. Having these talented players come to Poland and raise the quality of play will only result in a better product for the fans, whom the younger ones make take up hockey one day. While this year, due to COVID-19, there are no fans in the stands, the previous years saw attendance increases.

The NHL Players Who Played In Poland. Part 3

The NHL Players Who Played In Poland. Part 2

The NHL Players Who Played In Poland. Part 1

Bryan Pitton was another successful North American goalie in Poland, which has been a recent trend. The Brampton Ontario native played for the Brampton Battalion in the OHL, where the Edmonton Oilers drafted him in the fifth round of the 2006 NHL draft. In 2008, he would start his professional career after signing an entry league deal with the Oilers. He would mostly start for their ECHL team, the Stockton Thunder, while also appearing for the Oklahoma City Barons and Springfield Thunder in the American Hockey League. He earned a few NHL callups where he served as a backup. Back up duties and pre-season games were his only NHL appearances.

Pitton would then head over to Europe after his entry league deal. He signed with the Fire Flyers in England. He would return to the North American pro scene in the Central Hockey League the following year with a standout performance for the Allen Americans. He helped the team claim a championship as the starting goalie. Following the CHL’s demise in 2014, he signed in Poland with KH Sanok posting one of the best saves percentages of the decade. After one year in Poland, he would return to Brampton, playing a few games for the Brampton Beast in the ECHL when needed until he retired in 2018.

Finnish players have continued to become more common in the PHL, especially after the influx of Finnish coaches bringing in Mestis players. Toni Dahlman is one of the few former Liiga players to play in the PHL. Dahlman was apart of the Finnish team that won their second world juniors gold in 1998. The Helinski native developed in the Jokerit system before moving to Ilves to play in the Liiga full time. In his lone season, he led rookies in points with 28 and was named the Liiga rookie of the year. The Ottawa Senators drafted him in the 9th round of the 2001 NHL draft. The 5’11 right winger signed a two-year deal with the Senators. He mainly played with the Grand Rapid Griffins, their AHL affiliate. He would play 22 games with the Senators recording a goal and an assist.

He returned to Ilves after his deal with the Senators was up. He would play in the Liiga until 2010, except for a season with Mora IK in the SHL. Dahlman would then make a few stops around Europe in the DEL, EBEL, Kazakhstan, and the VHL. Shortly after the PHL season started in 2016, he signed with KH Sanok. He recorded four goals and thirteen assists in twenty-two games. He would leave Sanok in February and sign in the EIHL with the Braehead Clan. He retired after the 2016 season.

Another player to join Sanok after the 2016 season got underway was Jason Missiaen. Missiaen stands at 6’8, making his size his strongest attribute. The Ontario native was in between the posts for the Peterborough Petes. His OHL success would see him drafted by the Montreal Canadiens in the fourth round of the 2008 NHL draft. He would not sign with the Canadiens, and eventually move away from the Petes as well, switching to the QMJHL with Baie-Comeau Drakkar. After his final junior season, he would sign an entry league deal with the New York Rangers. Missiaen would prove to be a great ECHL goalie but struggled when called up to the AHL. He still was able to earn a few call ups to the NHL, backing up Henrik Lundqvist in a couple of games for the Rangers.

The Rangers signed him to a one-year extension, but with no progress in the AHL and a down year in the ECHL. He was not re-signed in the offseason. The towering goalie would join Sanok in October of 2015. He would play in 29 games for Sanok, recording a .913 SV%. He would leave Sanok after one year and join the French team Chamonix-Morzine. He retired after one year in France and currently works as a goaltending coach.

Kalus is one of the rare players on this list to make NHL appearances for multiple NHL squads. The Czech power forward was drafted by the Boston Bruins in the second round of the 2005 NHL draft. At 18, he would move over to the WHL with the Regina Pats. That lone season was enough for the Bruins, who signed him to his entry deal and sent him to the AHL. In his rookie AHL year, he earned a call up to the Boston Bruins. In his first NHL appearances, he  recorded four goals and an assist in nine games. During the 2007 offseason, he was traded to the Minnesota Wild, with a 2009 fourth-round pick (Alexander Fallstrom), for goaltender Manny Fernandez. After one year with the Wild’s AHL affiliate, he would sign in the KHL with HK MVD for the 2009 season. He returned to the Wild in 2010, mainly playing for their AHL team, but appeared in two games with the Wild. Still playing in the AHL, Kalus would be traded to the Columbus Blue Jackets for future considerations in 2011. He never appeared for the Jacktes, but did play eight games for the Springfield Falcons in the AHL.

The Ostrava native returned to Europe the following year. In his first season, he appeared in both the SHL and Tipsport Extraliga. He would become a journeyman soon after switching teams frequently. From 2012 to 2017, he appeared in Czechia, Denmark, England, France, Italy, Slovakia, and Sweden. To end the 2017 season, Kalus joined Krakow in Poland. Kalus would help Cracovia Krakow capture the PHL championship. After a successful end to the regular season and playoffs, Kalus would return to Krakow for another year. The first time he had played for the same team two seasons in a row with no stops in between since he was in the AHL. He would retire after his second year with Krakow. In total, he recorded 26 goals and 32 assists in 75 PHL games. He currently works as a hockey agent.

One thought on “The NHL Players Who Played In Poland. Part 4”