We are back to looking at the players who reached the highest peak of the hockey world by playing in the National Hockey League and then played in Poland. How they ended up in Poland, how they performed, and where they are now. I paused this series for a bit when I initially was writing it. Part five was supposed to be the final part. Over the last couple of seasons, many former NHL players have found themselves in Poland primarily due to the COVID-19 pandemic. Free-agent options were slim for plenty of great imports. Before we get to the Covid years, we have to close out the 2010s. This group of players saw something uncommon from the previous one. Most of the players featured in this part were first or second-round NHL draft picks. In fact, at one point, Poland had more top picks from the 2000 NHL draft than any other league.

Jaroslav Kristek moved up the Czech hockey system very fast. At 17-years old, he already found himself as a full-time forward on HC Zlín in Czechia’s top senior league. His performance at the U18 World Championships led to the Buffalo Sabres taking him 50th overall in the 2nd Round of the 1998 NHL entry draft. He would immediately head over to North America, playing two seasons in the Western Hockey League with the Tri-City Americans. In 2001, he signed his entry league deal with the Buffalo Sabres. He would mainly play in the American Hockey League with the Rochester Americans. In the AHL, Kristek recorded 49 points in 125 games. He would get one cup of coffee in the NHL, playing in six games during the 2003 season.

After 2003, Kristek would return to Czechia. He would play in Czechia for the next seven years and won the Extraliga championship in 2009 with HC Energie Karlovy Vary. After over 400 games in the Extraliga, the veteran forward would start to move around Europe with stops in the Kontinental Hockey League with Lev Poprad and a few various teams in Belarus’ top league. In 2017, he would sign in Poland with GKS Tychy. The high-scoring Czech winger would play a valuable top 6 role in Poland, scoring 18 goals in 42 games while helping Tychy to a second-place PHL finish and a Polish Cup victory. He would leave Tychy after one year and spend the next few seasons in the lower divisions of France. He appeared to retire after the 2021 season but returned at 42-years-old in 2022 to play for HC Brumov-Bylnice in Czech’s fourth division.

Krystofer Stanley Kolanos, better known as Krys Kolanos, proved to be one of the top prospects in hockey during the early 2000s. After recording a 32-point rookie year for Boston College, Kolanos was drafted 19th overall by the then Phoenix Coyotes in the 1st Round of the 2000 NHL entry draft. Krys dominated the college level for another year before making his NHL debut in the 2002 season. The Canadian forward recorded a 22 point rookie season in just 57 games. Unfortunately, on January 29th, 2002, Kolanos would suffer a nasty concussion and be knocked unconscious after being hit from behind by Buffalo Sabres defensemen Václav Varaďa. The concussion affected the rest of Kolanos’ career, and he ended up only playing two games during the 2003 season. He returned at the end of 2003 to represent Canada at the World Championships, winning a gold medal. From 2002 to 2013, the Calgary native with Polish roots played in 151 NHL games and 362 AHL games. He was a dominant AHL player recording a .93 point per game average during the regular season.

His North American career would come to a close after the 2013 season. He would have two short stints in the KHL, playing in only 11 games across two seasons with two clubs. He took the entire 2016 season off but returned the next year, playing in Germany and Italy. To start the 2018 season, Kolanos would sign in Poland with GKS Tychy. The former Coyote was a significant signing in Poland given his heritage and NHL past. He would play in 16 PHL games, recording 16 points, and helping Tychy win a Polish Cup! Shortly after, he would leave Tychy and return to Italy, where he played seven more games before retiring.

Pick up a custom NHL jersey in time for Fathers Day from CoolHockey.com! 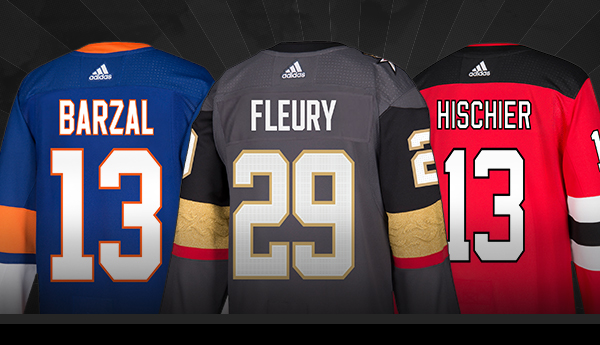 Continuing the trend of high picks, Tomas Kana was the top junior player in the HC Vítkovice system. In 2016, Kana became a full-time player in the Extraliga and played for Czechia at the Wolrd Juniors. The cherry on top of his season would be the St. Louis Blues selecting him in the second round, 31st overall of the 2006 NHL entry draft. Kana was the first pick outside of the first round, which meant the Blues had to have high hopes for the Czech center. After another year in Czechia, Kana would sign his entry league deal with the Blues in May of 2007. He mostly spent his time with the Blues’ ECHL affiliate the Alaska Aces. During the 2010 season, he found himself traded to Columbus Blue Jackets and finally found his groove in North America. After only one point in 18 games with the Blues’ AHL affiliate, he quickly amassed 28 points, including 15 goals, in just 50 games in the Blue Jackets system. This earned him a call up to the NHL, where he recorded two assists in six games. He would return to the Jackets organization the following year but struggled again in the AHL.

He returned to HC Vítkovice for the 2012 hockey season but did not make much of an impact in the Extraliga. Since then, he has bounced around the Czechia hockey system playing for plenty of teams at all three levels, along with stops in Germany, Kazakhstan, Romania, Slovakia, and the United Kingdom. From 2012 to 2017, he played for 13 different teams. He would finally land in Poland with Zaglebie Sosnowiec. Kana was trusted to be a leader in Sosnowiec and delivered on the ice, recording 33 points in 42 games, which was second on the team. Sosnowiec would fall to almost last but win in the relegation round to stay in the PHL. Kana did not return to Sosnowiec and has since played in England and the Czech third division.

The 2000 NHL draft was loaded with Russian talent. Forty-two Russian players would be taken in the draft, with eight being taken in the first round alone. One of the first Russians taken was Pavel Vorobyov. Vorobyov was born in Kazakhstan but grew up in Russia and developed in the Yaroslavl system. The Chicago Blackhawks drafted him 11th overall in the first round after he recorded eight points in six games at the U18 World Championships. The Hawks brought him over to North America for the 2014 season. He went up and down between the NHL and AHL. He had a decent amount of success with multiple long NHL stints and over 100 AHL points. Despite recording 21 points in 39 games during his final NHL season, he would return to Russia.

After returning, Vorobyov would play in the KHL from 2007 to 2014. After a couple years in Russia’s second league, he would spend the next two years with the Edinburgh Capitals in the United Kingdom’s top league. After Edinburgh was eliminated from the EIHL playoffs in 2018, Vorobyov was given his release from the club. He would be a late addition to Cracovia Krakow for their PHL playoff run. Vorobyov would be quite the clutch performer recording 14 points in 13 PHL playoff games. After the playoff run, he would not return to Krakow and would play for three more years between Romania and Ukraine. In 2022 he began his coaching career and currently coaches junior hockey in Russia.

Next in the trend of top draft picks is Jason Bacashihua, who was drafted 26th overall in the 1st round of the 2001 NHL entry draft. The Dallas Stars made the big pick after the Michigan native led the Chicago Freeze in the NAHL. He would only spend one more year at the junior level leading the Plymouth Whalers in the OHL and Team USA at the Worlds Juniors. At the end of the 2002 season, he would sign his entry league deal with the Stars. This would be the start of his journeyman career, as he would appear in multiple different NHL organizations, mainly as their AHL starting goalie. He would play in 38 NHL games from 2007 to 2008 with St. Louis; he also represented Team USA at the World Championships during those seasons. He played in over 300 AHL games across 11 different seasons, winning a Calder Cup in 2010.

After his 2012 season in the Philadelphia Flyers organization, he would pack his bags and head to Europe. Over the next three seasons, he would be the starting goalie for the Straubing Tigers in Germany’s top senior league, the DEL. Following that, he would be the starter for HC Banska Bystrica in Slovakia for two seasons before a season in South Korea. Bascashihua didn’t sign right away to start the 2018-19 season but would head to Poland to join Cracovia Krakow in late September. Krakow needed a goalie after not re-signing Polish legend Rafal Radziszewski. Jason Bacashihua would only play five games in Poland, recording a .906 save percentage. It wasn’t a fit between the two sides, and Krakow would go with the next player on our list. Bacashihua would finish the season in Germany’s second league. He has played in England, Hungary, and Italy over the past few seasons.

Miroslav Kopřiva breaks our streak of top picks, as he was only a sixth-round selection of the Minnesota Wild in the 2003 NHL draft. The big goalie had been one of the best goalies in the Czech U20 league but had yet to play at the senior level. The Wild allowed him to stay in Czechia and start to take his baby steps in senior hockey. The team would bring him over to North America for the 2006 season. He would appear up and down the North American professional hockey levels over the next two years. He posted strong numbers in the third between the CHL and ECHL but posted lackluster numbers in the AHL. He never did appear in an NHL game but served as a backup in both seasons.

Kopřiva tried to stay in North America for the 2008 season, signing with the Austin Ice Bats of the CHL but would leave the team and return to Czechia after 10 games. He would spend the next nine seasons in Czechia and Slovakia, even appearing in the KHL for HC Slovan Bratislava. In 2018, he joined the Coventry Blaze of the EIHL in England. He would be beat out for the starting job throughout the season by another former Wild goalie in Matt Hackett. Kopřiva would then join Cracovia Krakow in Poland for the end of the 2019 season, replacing Jason Bacashihua. The Kladno native then played some of the best hockey of his career. He was lightning in a bottle for Cracovia, helping the team to a silver medal after recording a .926 save percentage in 14 playoff games. He would re-sign with Cracovia for the following year. He remained the starter for the red and white, posting a .916 sv% in 40 games. He did not return for a third season in Poland and never signed anywhere. In 2022, he resumed his career and returned to Czechia with HC Letci Letňany in the Czech third division.