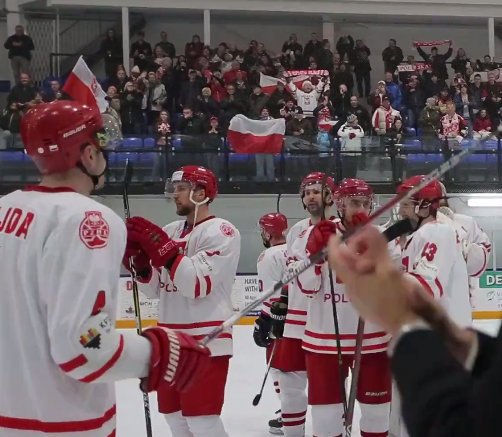 Polish Heritage in Hockey is a series that aims to highlight and learn more about those working in hockey with Polish heritage, whether their role is as a player, coach, executive, media member, or even behind the scenes.

This is the first edition of Polish Heritage in Hockey, and Andrew Zardarnowski was chosen for the first piece for specific reasons. Zardarnowski is a media member in Hamilton covering the Montreal Canadiens with a focus on their minor league system. Andrew works as a writer for Habs Eyes on the Prize, and you can hear him on TSN 690. As for why he was my choice for the first guest, Zardarnwoski was one of the first media members to really reach out and interact with the Polish Puck blog. He is also an avid follower of the Polish National team.

Sorry #Habs fans, but tonight I am off-duty to go watch Ted Nolan and The Polish Men's National Team take on the @SCGenerals. pic.twitter.com/K2wCP7YoqR

Andrew’s family has a story that is similar to that of many Polish immigrants to the states, “Both my mom and dad were born in Poland, displaced by the war. Both my grandfathers were Polish military officers, so obviously they weren’t seen favorably after the war after communism kinda took hold in Poland. On my father’s side, my family was displaced to France, where my father did his elementary schooling. On my mom’s side, my grandfather, who had a proper education and was an officer, couldn’t get anything more than a menial job. After that, my mother immigrated to Canada as well. Both my parents are Polish immigrants in Canada, and I’m a first-generation Polish.”

Like most people growing up in a North American home, where heritage was viewed as a crucial part of life, Andrew questioned his father on what was the point of it all. His parents were proven right though. “Every job I have had, there have been Polish colleagues, Polish contractors, or Polish clients. Where having that additional language became an advantage in that situation professionally.”

The biggest thing that I learned from our talk was about the large and proud Polish community in Hamilton. “I saw them (The Men’s National team) in Hamilton when they played against the Stoney Creek Generals. The crowd was 100% Polish, and it was amazing. We were loud! We all had a Polish jersey on, I saw a priest with a Polish jersey on it was wicked. We were chanting POLSKA POLSKA. You could see the smile on the player’s faces, they were in a foreign country but felt welcome.”

“That is the cool thing about Polonia. Although a majority of us are born outside of Poland, we take pride in the fact were Polish. Poland has a rough history it was wiped off the map for 100 years. There is a lot to be proud of. It (Poland) is a history of fighters, a history of people that won’t be told what to do. They’re proud of where they come from, and who they are, who their father was, who their grandfather was, and what they did. We like to show it. There was a men’s volleyball team that came to Hamilton from Poland. The crowd was rabid for Poland. I saw friends in the crowd we speak English to each other, but once someone is wearing a Polish jersey on the playing field you become Polish, you start shouting stuff in Polish and telling people stuff in Polish. It is an opportunity to turn off your Canadian self and turn on your Polish self.”

There was an easy link for him to be into hockey growing up in a time when Quebec had both the Montreal Canadiens and Quebec Nordiques, despite the two teams Andrew made it quite clear where his alliances lay, “I hated the Nordiques growing up oh my goodness. They’re the team I loved to hate. The habs playing the Nordiques on a Saturday was peak youth for me, I have such vivid memories of watching the teams play hating the Statnsys and Michel Goulet.”

Joining the rounds of hockey media though, was not something that Zadarnowski was drawn to right away in his life. He wasn’t a journalism major in college and works in the biomedical field. He needed an outlet for creative writing. When Montreal Canadiens’ SB Nation blog Habs Eyes on the Prize sent out a tweet saying they needed writers, he was instantly drawn to it. He sent in quite the application.

On the four-year anniversary of my application to be a writer for @HabsEOTP, I dug up the e-mail and decided to share it with everyone. Probably the most fun I ever had writing a job application. pic.twitter.com/WdwFFRlsmK

His first piece for the blog would come in September 2015, where he created a Sporcle Quiz for Montreal Canadiens captains.

“I have developed a pretty solid following of late and have been growing my twitter base. I have been interacting with some amazing people actually online, people who read Habs Eyes on the Prize. It is a top site for Montreal Canadiens news and has got a very good reputation. Mainstream media actually read us, through that they got to know to me. I talk with the French and English Montreal Media. I got on to the radio on TSN 690, where I have a weekly slot on Sunday morning, where I talk about what is going on with the Habs. It has kinda just been building from there.”

While he hasn’t ruled out ever pursuing writing full time. He has used it to help his professional career. “The work I am doing with talking on the radio, writing articles, interacting with players and coaches for interviews there are soft skills and hard skills that I am able to pour into my professional life. Say I’m doing an interview on a radio, where the host is asking me questions. You don’t have these questions prepared ahead of time. You gotta learn to think on the fly, gotta learn how to answer persuasively, and gotta learn how to annunciate and speak clearly. Those are all great life skills that I apply to talking with clients in the biomedical field.”

Andrew has earned his following is in part due to his excellent coverage of Montreal’s minor league system. “I’m a big fan of depth, knowing there is a contingency plan if player X is injured in the NHL, player Y will get called up from the AHL, and player Z will be called up from the ECHL to AHL. I like kinda seeing that deep thought in player movement.”

This year the ECHL will feature Polish player, Alan Lyszczarczyk, playing for the Fort Wayne Komets. “I made contact with the reporter who covers the Komets last year because Montreal had a guy there. I emailed him saying hey you’re going to need to learn how to pronounce and write this guy’s name to which he replied that he might not come back from vacation.”

Zadarnowski also gave his opinion to the league in regards to a fit for Lyszczarczyk. He believes the ECHL is more similar to a European style, and a finesse player will thrive there. It also is a crucial first step in development. “The ECHL is a stepping stone between amateur hockey and AHL  pro hockey. If the step from amateur to AHL is too high, people are using the ECHL now to ease people in. That is the Toronto model now, anyone who signs a Marlie contract plays at least a game in Newfoundland.”

One piece of Andrew’s work that I would recommend everyone check out is his series on the history of Montreal Canadiens AHL coaches starting here. If you would like to check out more of Andrew Zadarnowski’s work, make sure to follow him on Twitter @AZadarski and on Habs Eyes on the Prize.