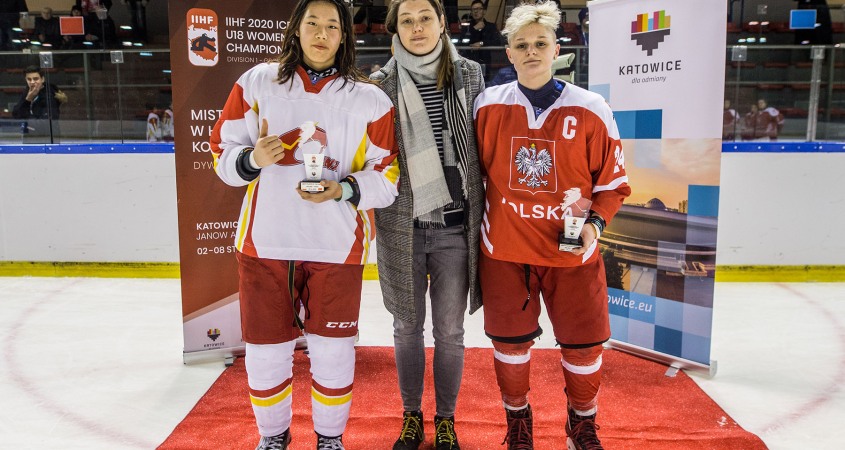 For the second straight year, Sikorska takes the number one spot in our rankings. When she is on the ice, she forces you to pay attention to her play. The instant the pucks lands on her stick, it is going in the opposing zone for a scoring chance. She is the best offensive player Poland has seen since Karolina Pozniewska and Kamila Wieczorek. She has all the tools to become the best Polish hockey player on the planet. If Sikorska is on the ice, there is no doubt who the best player on the surface is. She is just absolutely ridiculous at points. Take this goal vs. Hungary at the Olympic Hopes tournament. There is a defender draped over her, and she still pushes forward and is able to move the puck out around the Hungarian goalie for a goal.

Sikorska mostly played in the top Czechia women’s league this year. In her third year with SK Karvina, she recorded 21 points (11-10-21) in 11 games. This ranked fifth in the league overall, and the second by any under 18 player in the league. Sikorska also played five games in EWHL for Poland’s Silesia Brackens, where she posted three assists. Sikorska will most likely be able to jump to a higher league next season if she chooses to do so. It would also probably be best for her continued development.

Sikorska also represented the Polish U18 squad at various events, including the division 1B IIHF U18 World Championships. At the Olympic Hopes tournament, she was Poland’s best player. She scored three goals, including two highlight-reel ones. At the IIHF U18s, she recorded four points (3-1-4) in 5 games. This was down from her ten points the previous year. She did post 33 shots, an average of 6.6 shots per game. Sikorska will be able to represent Poland at the U18s one more time next year, and every opponent should be scared.

Sikorska also represented the Polish senior team at the Legacy Cup. Her best game there being a one goal and one assist effort vs. the German squad at the tournament. The 5’5 forward made her senior IIHF debut at last year’s World Championship, recording one goal. This year she most likely would have become a more significant part of the senior team at the Worlds. It is a shame we won’t get that performance.

Sikorska is leaps and bounds ahead of most of her counterparts with a very select few that can keep up. It is very noticeable when watching team Poland how far ahead she is. This isn’t just for the Polish U18 squad; any team she plays on, she will stand out. She has terrific puck control abilities, a very strong skater, with a great shot. Having an offensive player as strong as Sikorska is part of why women’s hockey is on such a rise in Poland. While the men’s team struggles to get modest contributors into stronger leagues, the women’s side is able to get players like Sikorska that lead stronger leagues.