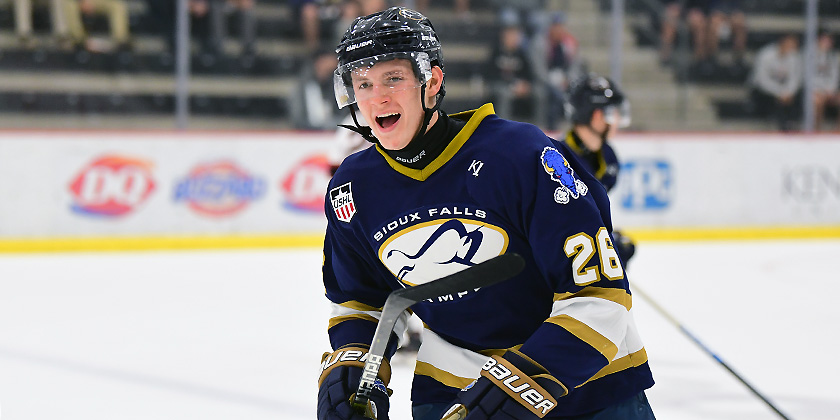 We have now reached the top five of the list. When making the list, I had about three tiers of players divided by what I believe the player was most likely capable of. The top five are their own tier of players that I would label as the definitive players that are the future of Polish hockey. These five players have the potential to elevate Polish hockey to a new level. They’re all more than capable of being top players in Poland, or key players outside the country. Poland reaching the elite division and staying there relies a lot on these players reaching their full potential.

When Alan Łyszczarczyk was ranked by NHL central scouting just a couple years ago it was seen as a miracle in Polish hockey. It was something that wouldn’t be done again in probably another decade. Then Jakub Lewandowski just went and did it just like that, like it was easy.

I am going to state at times in this article it may seem like I’m being more critical of Lewandowski then I am of other players. That comes from grading Lewandowski as a potential NHLer. He is high and far above every other U20 Polish player on this list, and he was easily the number two U23 player.

The year started off with a big suprise in the Polish hockey world, when it was announced that Lewandowski was in camp with the Sioux Falls Stampede of the United States Hockey League (USHL). The USHL is the top junior hockey league in America, and comparable with the big three junior leagues that make up the Canadian Hockey League. Lewandowski would make the team out of camp, setting the course for a promising but up and down season.

The 6’2 forward was coming off a strong year in the top Czechia junior league with 48 points (22g-26A) in 48 games, along with being what will go down as one of the worst roster decisions in history, when he was left off Poland U20. The Stampede didn’t really know what they had in Jakub Lewandowski. They knew one thing though.

After that, well, Owens (Scott Owens, GM/Head Coach of the Stampede) is still figuring out who’s best at doing what. He knows Jakub Lewandowski, a 6-foot-2 forward from Poland, can score.

Lewandowski started hot out of the gate with seven points (4g-3a-7pts) in seven games. This was good enough to earn him a C rank on the NHL Central Scouting preliminary list. A C rank equals a player being considered a fourth round or lower selection in the NHL entry draft. Lewandowski would start to slow down and wouldn’t record another point in the next 10 games. He still was ranked a C player on the November 11th edition of the NHL Central Scouting’s updated list. This would be his last appearance on the list for the season.

Lewandowski finished the year with 20 points (11g-9a-20pts) in 42 games. It was the tied for the 65th most points by a U19 player in the USHL, and was tied for 22th among USHL rookies. It was also tied for fourth on the Stampede overall, the Stampede were starved for offense overall finishing second to last in goals for.

In total there were 93 production matches for Lewandowski’s season. Only 4.3% of his matches went on to play 100 NHL games. A majority matches played no professional hockey or very low leagues after their college careers. That is the big thing to consider with USHL matches, as a majority of players go on to play division 1 college hockey for four years, and did not try their hand at professional hockey. The second highest category was players with 100 games in the AHL or a top league in Europe with 25.8%.

Lewandowski has few things working for him. He has got size, the shot, and net front presence to make an impact on offense. The rest of his game needs a lot of work though, and he has to be more consistent. He can too often completely disappear on the ice. The lack of consistency is the biggest thing that killed his chances of being drafted

The Torun native seemed a bit awkward with his size at times, gaining strength will be key for him during this off season. He doesn’t have the same advantage with his size as he did in Czechia and Poland. Improving skating, hands, and offensive awareness will all do wonders for the young Polish forward.

As of right now I don’t see Lewandowski getting drafted, I just don’t see that as his most likely outcome. He can definitely reach the NHL level, but he is going to have to make some quick developments. That could happen, this was only his fourth season outside of Poland. I think Poland is guranteed to have another gem on their hands though, who is going to be able to play in the top leagues of Europe like the KHL, NL, or SHL. The exact thing that Poland needs. Lewandowski is definitely the second largest part of the future core in Poland.