I have started a youtube channel for Polish Puck. You can subscribe here. This channel will never have any content that would be regarded as journalism. The channel’s purpose is to try and help archive Polish hockey as well as provide a source for a film of players for interested teams and coaches. A lot of Polish hockey history remains untracked and that is unfortunate. Just about a month ago there was a discussion in my mentions from a hockey fan trying to figure out when the Gdansk jersey he purchased is from. Even though the jersey is thought to be from the 90s no one is exactly sure when. 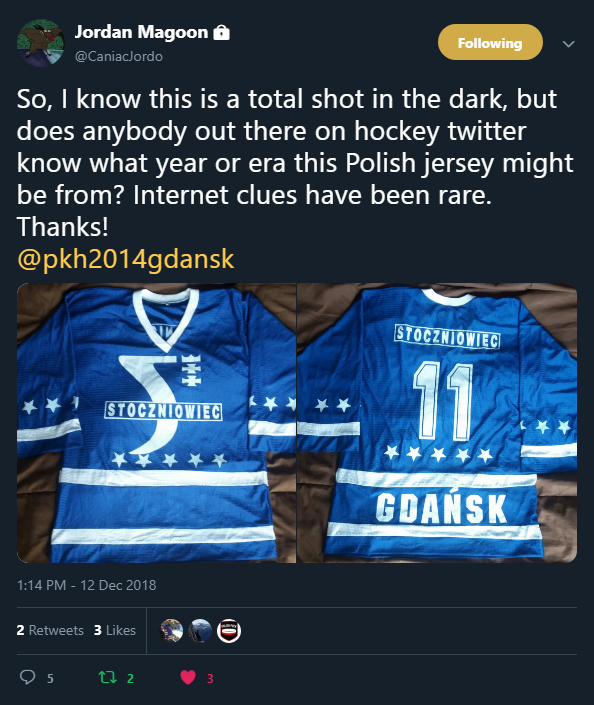 Hmmm don't you think it could be 1997/98 or 1998/99? I'm pretty sure that the design was similar to those presented above. I found a video at youtube from 92/93 and their away jerseys were different at that time. Plain and simple.

I can't remind myself this style of jersey as used by players, so it must be before 2000. I'd give a shot at early-mid 90's, i can remember some fans wearing this style at the matches

Half of 90's definitely

When something as a simple as a jersey from less than possibly 20 years ago can’t be 100% tracked you have a problem. There is also a problem of the IIHF not being best at tracking stats for lower tournaments. For example at the recent  U20 World Championships Division 1B, on Poland’s 4-2 goal Kamil Walega carries the puck into the zone and then before goes around the net, he throws the puck to in front of the net to Sebastian Brynkus who snipes it for the insurance goal. The IIHF gave this goal to Kamil Walega with an assist to Brynkus. Here is clear footage and some photo proof that the goal is Brynkus’. In the photo; Black circle = puck, Green = Brynkus, Red = Walega

So if you have anything footage of Poland hockey especially from before 2010 send it my way on twitter, facebook, or email via PolishPuckContact@gmail.com. Also if you want to help support Polish Puck consider checking out our store. More designs will be added over time!