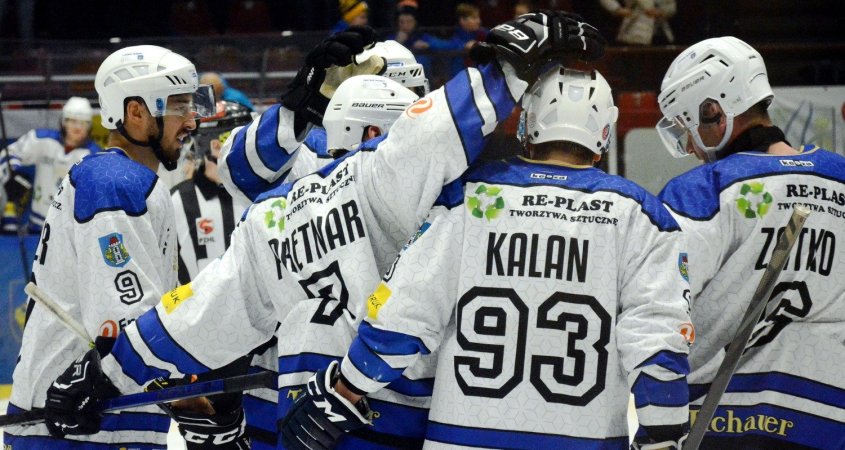 We have reached the number one spot in our predictions. The shame in making a list in this format is that the champion has already somewhat been revealed if you followed closely enough. The reign of GKS Tychy is over. All hail the new king.

What a season it was for Unia Oświęcim last year. Their initial head coach left after just a couple weeks to coach in Slovakia. The team hired a new head coach that might be one of the best hires in PHL history. Former Slovenian national team coach Nik Zupančič took over the team. He combined strong Polish talent with quite a few strong imports from his past. The team’s style clicked right off the bat, and the team only got better as the season went on. This resulted in them making it to the semi-finals and a possible chance at dethroning GKS Tychy. Then COVID-19 hit, and all of that went away.

Every PHL team fought or succumbed to the virus, with various cuts and departures that were pretty much out of their control. While the Oświęcim squad saw some critical departures in Andrej Themár, Dariusz Wanat, and Jakub Šaur. These were more regular departures who were replaced by quite a few new stars. In net, the team retained both their goalies. Clarke Saunders was fantastic in the regular season posting a .923 save percentage and somehow was even better in his one playoff series. Behind him, Sebastian Lipiński continues to develop into a future starter for both Oświęcim and the Polish national team.

On the defense, the team once again retained most of their core, while making a few new substantial additions. On the import side, they are the strongest. Miroslav Zatko is back for his 13th season in the PHL, which has to be some kind of record among imports. Peter Bezuška returned for his sixth season with the club, playing in over 200 matches for the blue and white while bringing a strong two-way presence. Slovenian Klemen Pretnar brought a similar presence and finished tied for second among goals by defensemen last year. The team also added Finnish defensemen Lassi Raitanen, who has yet to debut due to injury. He posted 32 points in 40 Metsis games the previous year. He should help provide offense on the back-end. To replace him during his injury, the team added veteran Canadian defensemen, Ryan Glenn. The 40-year-old defenseman has looked impressive so far, recording seven points in six games. Jakub Wanacki is the Polish leader on this defense and one of the league’s top Polish defensemen. While Patryk Noworyta still has a lot left in the tank. Miłosz Noworyta has a pretty bright future, and his development this year should be fun to watch.

Offensively you see a club that is rejuvenated completely. They are so exciting and dangerous to watch. The offense didn’t need an overhaul in players, just a bit of tinkering. Alexei Trandin is a guaranteed point per game player, as seen in the past three years in the PHL. Polish veteran Sebastian Kowalówka remains a strong producer. Simultaneously, Slovenia duo Gregor Koblar and Luka Kalan should again post strong production and two-way play. Russians Daniil Orekhin and Semyon Garshin both look to return to their KH Torun production highs, after up and down last years. Martin Przygodzki is still a great offensive addition to any team, with a chance to break out huge numbers if he is consistent. I still believe Łukasz Krzemień has a lot of potential and can show more than he did last year.

There are a handful of new forwards to the squad as well. Teddy Da Costa has joined the team from GKS Katowice, and the France national team forward remains one of the top players in Poland. The team also added young Finnish winger Jere Helenius, who posted 36 points in the Metsis last year. Patryk Kusak also returns from the Czechia juniors, continuing to help shore up the youth talent in Oświęcim.

The most significant addition was Eliezer Sherbatov. Sherbatov is just pure charisma on the ice. The 5’9 forward is easily one of the most entertaining players in European hockey. He is also Jewish and an Israeli native that is playing in Oświęcim. Many people may know the city better by its German name, Auschwitz, where Germany ran the concentration camp with the highest death total during World War 2. One of the darkest places in human history. Due to this, some felt Sherbatov signing with the team did not feel right. I understand where they are coming from, but for Sherbatov, this is a chance to be a hero in the city and take back the town. The modern-day Oświęcim is not the place it was in World War Two. His play has already made him a fan-favorite in the town, as he attempts highlight-reel moves that are just woven casually into his game. The rest of the PHL and Polish hockey scene also immediately welcomed him to the league and offered their support.

I think the top three clubs’ skill level is all pretty similar in terms of who is the best. Sometimes having a bit better goaltending or worse defense, but overall it levels out. So why Unia Oświęcim the champions? It comes down to two main reasons. The first is the depth they have. I think, especially on defense. They’re just able to outmatch any team. While some teams may have bigger stars at the top. Up and down every line, Oświęcim is my pick as the best squad. The second reason why is they are more of a cohesive unit than other teams. The team bought into Nik Zupančič’s system last year and only swapped out five players. This is a team built to win, and they don’t have the longest window. I would like to see younger talent featured in the lineup, but it is hard to take away a spot from their roster’s talent. This was a championship-caliber roster last year, and they only improved on it during the offseason. That is why from the start, they were my championship pick.