When you look at hockey in Poland, there is one big thing that sticks out on the Polish hockey map, and that is Gdańsk. Most teams are close to the borders of Czechia and Slovakia. You go to Northern Poland, and there are just two teams, KH Torun and PKH Gdańsk. The coastal city of Gdańsk is positioned all the way on the coast on the baltic sea, the most northern club in the PHL. Their nearest rival, Torun,  is almost two hours away by car. PKH Gdańsk was pretty isolated from the rest of the league. It was a hockey family that had risen from the ashes of an extremely prominent fall. PKH Gdańsk restored hockey in the city, and now their own fall has come. Their fall at the hands of the same group that orchestrated the ashes they formed from.

Stoczniowiec Gdańsk was a prominent member of Polish hockey, as other northern clubs in Poland fell, they stayed alive into the 2000s. The team didn’t achieve great success during this time. They made it to the bronze medal game quite a few times and won bronze in 2003. They also just escaped relegation multiple times during this span. Things were not on the way up, and the 2011 season hit. The team was in financial ruins.

I remember how in 2011 Stoczniowiec’s band broke up. There were large arrears and we know that this happened thanks to President Marek Kostecki. He could come before Christmas when he hadn’t paid players for months and told them to enjoy having dinner before the match. I had a full fridge as a young boy with my parents, but older players with their own families had tears in their eyes. They could not buy gifts for their children, and they had debts and loans themselves. As I watched it, something burst inside me. What happened when Stoczniowiec fell apart is unthinkable. – Aron Chmielewski

The team did not pay their players, and according to Jan Steber, PKH Gdańsk’s captain, and former Stoczniowiec Gdańsk forward, those debts are still not paid to this day. The conductor of this orchestra of chaos was team president Marek Kostecki. His acts in the final days of the original Stoczniowiec Gdańsk would have tainted his reputation forever and had him exit the field entirely, but not in Poland.

I will start with the history of years ago, when before the first season in the Premier League I was at talks with president Marek Kostecki. The conversation was conducted as if he did not even know what position I was playing. He offered me a contract for 5 years for PLN 800, and the contract did not provide for the possibility of raising it in subsequent years. President Kostecki noted that he gave me the opportunity to sign the contract, just because I’m a Polish youth representative, he also mentioned that if I don’t sign this contract I won’t be able to train with the senior team. I was there with my father who, after leaving, laughed and advised me not to sign anything with this man. – Szymon Marzec

Despite winning their placement game to end the 2011 season, the team would not play in the PHL the following year. They wouldn’t play anywhere, and Gdańsk fell off the hockey map. The Stoczniowiec Gdańsk organization would play in 2013 in the Polish second league, under the name KH Gdańsk. This would be a one-season show, and the team would not return afterward.

In 2014, there was a light in the tunnel for the first time. A new Gdańsk organization was formed, PKH Gdańsk. The team would assume the Stoczniowiec Gdańsk name, but they were not at all the same organization. In their first season, they lost in the semi-finals of the Polish second league.   The following year though, they would defeat UKH Debica in four games to earn promotion to the top league. 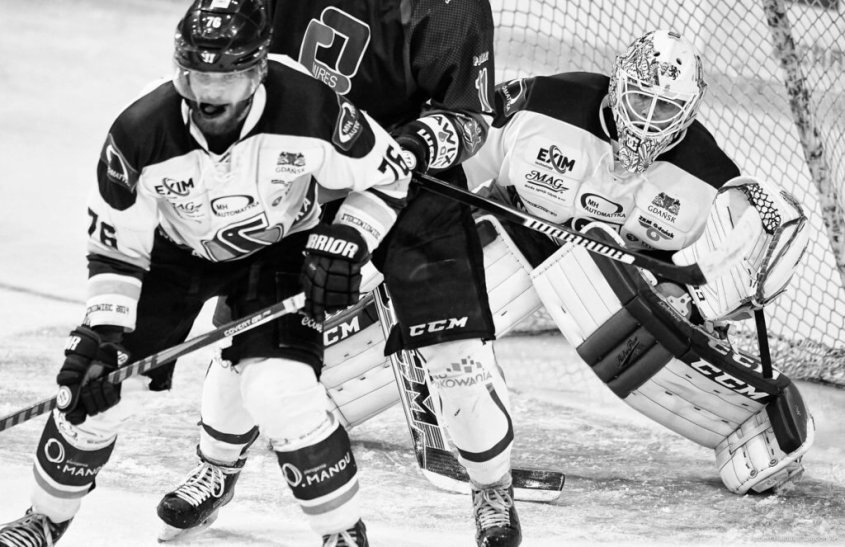 Once being promoted to the premier league, the team would assume the name MH Automatyka Gdańsk. They had a long way to grow, as Stoczniowiec Gdańsk’s destruction really impacted the junior divisions in Gdańsk. In the first two seasons, they barely stayed in the top league, being saved in the relegation round twice.

People behind PKH are not motivated by financial reasons . All volunteers – to which I myself belong – support this project free of charge, often investing their own resources and time to implement the mission of popularizing ice hockey – a sport forever cursed for underfunding. – Maciej Kołek

PKH Gdańsk was a family of hockey supporters hell-bent on growing the sport in the city. They were a team facing a lot of roadblocks. The deflated junior system, high travel cost, were just some of the things the team was up against. The biggest thing building walls for them to try and smash through was Stoczniowiec Gdańsk. Stoczniowiec Gdańsk and team president Marek Kostecki charged an enormous amount for rent and didn’t give the team anything return. Almost zero maintenance was done to the arena under their watch.

I have always said that for 6 years we even played “away” in Gdańsk. During these 6 years. Spilled water, holes in the gate, it’s only me and Adam Rozenberg know how many times we cleaned the locker room of our team and guests 2 hours before the match. The first two years we had a counting office 2 by 2 meters, between two halls, there was half a shower, there were rats, and the holes in the walls were filled with pucks, which we exchanged as they were bitten. And so it looked. Then two years we had two rooms, and the last two years just one. Me, Adam, Aneta, two trainers, equipment, sometimes CEOs came, everything was there. In addition, each time an hour before and after the match we had to spread all the ads, extension cords, dryers and promotional materials because the hall host refused to leave them in a visible place. Everyone in the hall tried to help us. But when it comes to the management board of GKS Stoczniowiec, never, never. People in the hall tried to help, selflessly, often on a “just don’t tell anyone” principle. As for the cloakroom, Adam and I bought the carpet ourselves, we made all the cabinets, hooks, names, GKS Stoczniowiec did NOT do anything. There was a movie from the 50th anniversary of Hala Olivia and what cloakroom is shown? Ours, they’re ashamed of others. The showers for this year only had one working, shared with youngsters, pathology. Nothing has changed for 20 years – exactly so many years ago I was on the slide, this season we played the first match with SMS and the same, for those 20 years, water drips from the roof into the player bags. The guys have not yet gone out for the first shift and are already soaked from this water. – Krzysztof  Mieliński. PKH Gdańsk Technical Manager

PKH Gdańsk began to flourish with growing fan support and climbing up the PHL ladder. The 2019 year saw new highs in wins and points, and a spot in the PHL playoffs, after beating Opole in two games. This led to an exciting series with eventual champions GKS Tychy. They took the back to back champions to game seven, where they lost 2-0.

This past season the team once again posted new highs in wins and points with a 16 point improvement from the previous year. They allowed the least amount of goals in club history while scoring the most. This year would be another first-round playoff elimination, this time at the hands of Unia Oświęcim in five games. Despite the quick exit, things were looking up for the club.

Covid-19 would end the PHL season in the semi-finals. The virus continued to hit the world harder and harder. It had its effects on the economy of Poland as well, with sponsors and cities not being able to offer much. To accommodate this, the PHL decided to lower the requirements needed to play in the PHL, and a much cheaper wild card for teams that did not compete in the league the previous season.

The lower cost led to a few teams to throw their hat in the ring for a hopeful return to the PHL, including STS Sanok and KTH Krynica. The third team was Stoczniowiec Gdańsk, led again by Marek Kostecki. When I first heard the news, I honestly didn’t think they would get off the ground, but they kept advancing. Mid-June, it was announced that Stoczniowiec Gdańsk was ending its player loan agreement with PKH Gdańsk.

Stoczniowiec Gdańsk kept advancing in the licensing process, and with another enormous rent bill coming, the writing was on the wall for PKH Gdańsk. On June 26th, they announced they would not be playing in the PHL during the 2019-20 season. There was immediate sadness and outcry from fans and the Polish hockey community. In the days following, so many people released letters appealing to the city of Gdańsk to save the team. Along with criticism of Stoczniowiec Gdańsk. They have been quoted all throughout this article. I encourage you to read all the letters from players, supporters, and staff. They have all be complied here.

I don’t think PKH Gdańsk is dead entirely, and I hope to see the organization return in the future. This will only happen though with the construction of a new rink in Gdańsk or the removal of Marek Kostecki. While not everything about the team was perfect, I believe, at the professional level, they did a fantastic job of being a great sign of how good Polish hockey can be. The team finished towards the top of PHL attendance, and I have a feeling in the next decade, we will have a whole new crop of Gdańsk natives in PHL thanks to their short run.

It is my opinion that the set up of Stoczniowiec Gdańsk is both bad for hockey in Gdańsk and for Poland. Lotos PKH Gdańsk was a very competitive team that appeared very professional in their actions and transactions. Their supporters were rabid and passionate. It is the kinda team that helps lift up the reputation of Polish hockey, that is has been too easily spoiled by organizations that should have never been in the PHL in the first place. You just need to look at how many imports, have made Gdańsk their new home after playing for the club. Listening to players, staff, and supporters of Gdańsk hockey, it appears that Stoczniowiec Gdańsk is the exact opposite of them.

I wish Josef Vitek, Mateusz Rompkowski, and Michał Kieler the best in trying to lead this team, but a group of twenty junior players with a few random veterans is not going to succeed in the PHL. The league doesn’t need Janows, Opoles, or Polonia Bytoms anymore. That is the road I see the team heading down, and it is going to drag some talented players down with it. I hope that at the least, the players are treated better than the ones, who were there to witness and be apart of Stoczniowiec Gdańsk’s first unraveling.

I wanted to finish my career in Gdańsk, not in Silesia or somewhere else. In Gdańsk, but not under Mr K. Even if he paid with gold. I wanted to end up in our club with honest management, loyal sponsors and real supporters. With people who love hockey. – Jan Steber

One thought on “Hockey Heartbreak in Gdańsk. The Disappearance of Light at the End of the Tunnel.”