Number 3 on our list is a 14-year-old defenseman who already has already won a Championship in Slovakia.

Julie Zielinska is currently Poland’s best defensive prospect by a wide margin. At only 14-years-old, she plays in the top women’s hockey league in Slovakia. This season she recorded 9 points (2G, 7A) in 22 games for Popradskie Lisky. She also averaged 1.95  shots on goal per game. Her 9 points were good fourth among defensemen in the league. It was also the fourth most by any player under 17-years-old. Zielinska helped her team to a 12-2-1-1 record, good for second in the league. In the playoffs, Popradskie Lisky would win the championship downing MHK-Martin in the finals. Zielinska was one of four Polish players on the championship squad with Ewelina Czarnecka, Joanna Orawska, and Martyna Sass. 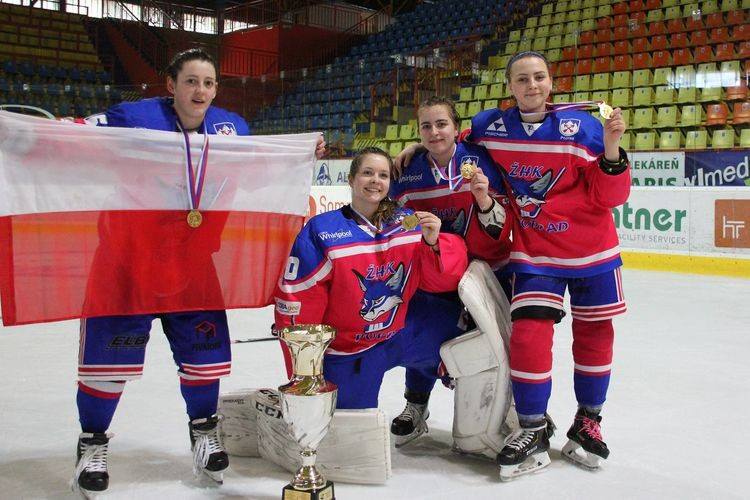 Before moving over to Slovakia, Zielinska suited up for Naprzod Janow during the 2017-18 season in the PLHK for her first professional games. In 14 games, she would put up 1 assist.

Zielinska started off her national team career this year making appearances for Poland’s U18 team at two tournaments. The first games were at Visegrad Four Tournament. This was a tournament held in the Czech Republic that saw Poland U18 take on Czech U16, Hungary U18, and Slovakia U18. It was a very tough challenge for Poland as all the teams are ranked inside the top 15 of IIHF women’s rankings while Poland sits at 22. It went as tough as expected for Poland as they were outscored 3 to 23. It was a great learning experience for all the players on the team, including Zielinska who played in all 3 matches.

Zielinska made her IIHF debut for Poland at the 2019 Division 1 Group B U18s. She was the youngest player at the tournament. This was the first time I got to watch Zielinska play, and I walked away impressed.  She showed a strong two-way game with excellent vision, especially on breakouts. The tournament showed that Poland still has work to do and there were often times where players seemed overmatched. Zielinska was never one of those players, she always seemed to play at the same level or above the competition. She also showed off a powerful shot from the point, something Poland’s defense has been lacking. In 5 games at the tournament, she recorded a goal and assist. This led all Polish defensemen in points at the tournament.

Next year, she should be one of the leaders on Poland’s u18 team.  The U18 team is very young with all of the team leaders returning. Their goals should be set on a possible gold medal and promotion. She may have also earned a spot on the Senior team in 2020. The team has not been afraid to use young defensemen before when they deserve it. Wiktoria Gogoc made debut when she was 15-years-old, the same age as Zielinska will be at next year’s World Championships. In terms of her professional career, we reached out to Zielinska on twitter to ask what her future holds in regards to moving to a stronger league. She told us that we will be most likely moving to a stronger league, but did not mention a specific one. Zielinska has a bright future in hockey and is the high-level defensemen the Polish national team really needs right now.